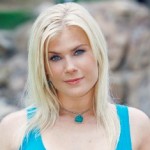 Alison Ann Sweeney is an American dramatic actress, reality show host and author. Sweeney is best known for her portrayal of Samantha "Sami" Brady on NBC's long running Days of Our Lives, a role she has played under contract with the show since January 6, 1993. In this role, she has earned four Soap Opera Digest Awards and a Fan Voted Daytime Emmy Award. In 2007, she became the host of The Biggest Loser. On July 8, 2000, Sweeney married David Sanov, after dating for nearly three years. The couple have two children: Benjamin, born in February 2005 and Megan, born in January 2009. The family currently lives in Los Angeles, California. Her television debut was at age five in a Kodak advertisement. A few years later, she was in an episode of Tales from the Darkside. Sweeney's first novel, The Star Attraction, was released in May 2013. Her second book, Scared Scriptless: A Novel, will be released in June 2014.