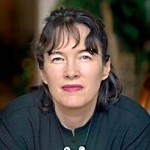 Sebold was born in Madison, Wisconsin. She grew up in the suburbs of Philadelphia and graduated from Great Valley High School in Malvern, Pennsylvania in 1980. She then enrolled in Syracuse University. In the early hours of May 8, 1981, she was raped while walking home through a park off campus. She reported the crime to the police, who took her statement and investigated, but could not identify any suspects.
Following graduation from Syracuse, Sebold went to the University of Houston in Texas for graduate school. She did not complete her graduate studies, likely due to drug use. Then she moved to Manhattan and lived there for 10 years. She held several jobs as a waitress and tried to pursue her writing career. Sebold wanted to write her story through poetry, but that, and attempts at writing a novel, did not come to fruition. She used heroin recreationally for two years, though claims she never became addicted. Sebold recounted her substance abuse to students at an Evening of Fiction workshop by saying that, "I did a lot of things that I am not particularly proud of and that I can’t believe that I did."
Sebold left the city and moved to Southern California, where she became a caretaker of an arts colony, earning $386 a month and living in a cabin in the woods without electricity. She would write under a propane lamp.[1] In 1995, Sebold applied to graduate school at University of California, Irvine (UCI).