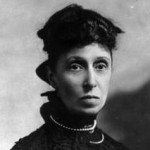 Alice Christiana Gertrude Thompson Meynell was an English writer, editor, critic, and suffragist, now remembered mainly as a poet. Meynell was born in Barnes, London, to Thomas James and Christiana Thompson. The family moved around England, Switzerland, and France, but she was brought up mostly in Italy, where a daughter of Thomas from his first marriage had settled. The British poet Francis Thompson, down and out in London and trying to recover from the opium addiction that had overtaken him, sent the couple a manuscript. His poems were first published in Wilfred's Merrie England, and the Meynells became a supporter of Thompson. His 1893 book Poems was a Meynell production and initiative. Her prose essays were remarkable for fineness of culture and peculiar restraint of style. After a series of illnesses, including migraine and depression, she died 27 November 1922. She is buried at Kensal Green Catholic Cemetery, London, England.