Showing all quotes
Alice B. Toklas (2) 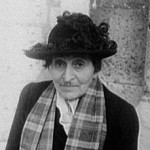 Alice B. Toklas was an American-born member of the Parisian avant-garde of the early 20th century. She was born Alice Babette Toklas in San Francisco, California, into a middle-class Jewish family and attended schools in both San Francisco and Seattle. For a short time she also studied music at the University of Washington. She met Gertrude Stein in Paris on September 8, 1907, the day she arrived. Together they hosted a salon that attracted expatriate American writers, such as Ernest Hemingway, Paul Bowles, Thornton Wilder, and Sherwood Anderson, and avant-garde painters, including Picasso, Matisse, and Braque. Acting as Stein's confidante, lover, cook, secretary, muse, editor, critic, and general organizer, Toklas remained a background figure, chiefly living in the shadow of Stein, until Stein published her memoirs in 1933 under the teasing title The Autobiography of Alice B. Toklas. It became Stein's bestselling book. The two were a couple until Gertrude Stein's death in 1946.