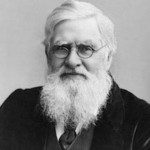 Alfred Russel Wallace, OM, FRS was a British naturalist, explorer, geographer, anthropologist and biologist. He is best known for independently conceiving the theory of evolution by natural selection and co-publishing a paper on the subject with Charles Darwin in 1858. Wallace did extensive fieldwork, first in the Amazon River basin and then in the Malay Archipelago, where he identified the Wallace Line that divides the Indonesian archipelago into two distinct parts, one in which animals closely related to those of Australia are common, and one in which the species are largely of Asian origin. In the autumn of 1846, he, aged 23, and John were able to purchase a cottage near Neath, where they lived with their mother and sister Fanny. During this period he read avidly, exchanging letters with Bates about Robert Chambers' anonymously published evolutionary treatise Vestiges of the Natural History of Creation, Charles Darwin's The Voyage of the Beagle, and Charles Lyell's Principles of Geology. On 7 November 1913, Wallace died at home in the country house he called Old Orchard, which he had built a decade earlier. He was 90 years old.