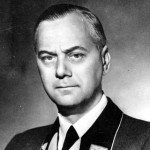 Alfred Ernst Rosenberg was an early and intellectually influential member of the Nazi Party. Rosenberg was first introduced to Adolf Hitler by Dietrich Eckart he later held several important posts in the Nazi government. He is considered one of the main authors of key Nazi ideological creeds, including its racial theory, persecution of the Jews, Lebensraum, abrogation of the Treaty of Versailles, and opposition to degenerate modern art. He is also known for his rejection of Christianity, having played an important role in the development of Positive Christianity, which he intended to be transitional to a new Nazi faith. At Nuremberg he was tried, sentenced to death and executed by hanging as a war criminal. Rosenberg was married twice. He married his first wife, Hilda Leesmann, an ethnic Estonian, in 1915 after eight years of marriage, they divorced in 1923. He married his second wife, Hedwig Kramer, in 1925 the marriage lasted until his death. He and Kramer had two children; a son, who died in infancy, and a daughter, Irene; who was born in 1930. His daughter has refused contact with anyone seeking information about her father.