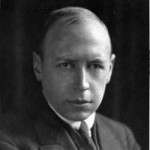 Alfred Noyes CBE was an English poet, best known for his ballads, The Highwayman and The Barrel Organ. Noyes was born in Wolverhampton, England, the son of Alfred and Amelia Adams Noyes. When he was four, the family moved to Aberystwyth, Wales, where his father taught Latin and Greek. The Welsh coast and mountains were an early inspiration to Noyes. In 1898, he left Aberystwyth for Exeter College, Oxford, where he distinguished himself at rowing, but failed to get his degree because, on a crucial day of his finals in 1902, he was meeting his publisher to arrange publication of his first volume of poems, The Loom of Years 1902. Noyes' last poem, Ballade of the Breaking Shell, was written in May 1958, one month before his death. He died at the age of 77, and is buried in the Roman Catholic cemetery at Freshwater, Isle of Wight.