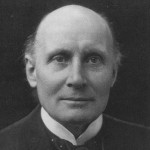 Whitehead was born in Ramsgate, Kent, England. Although his grandfather, Thomas Whitehead, was known for having founded Chatham House Academy, a fairly successful school for boys, Alfred North was educated at Sherborne School, Dorset, then considered the best public school in the country. His childhood was described as over-protected, but when at school he excelled in sports, mathematics and was head prefect of his class.
In 1880, Whitehead matriculated at Trinity College, Cambridge, where he was fourth wrangler and gained his BA in 1884. Elected a fellow of Trinity in 1884, Whitehead would teach and write mathematics at the college until 1910, spending the 1890s writing his Treatise on Universal Algebra (1898), and the 1900s collaborating with his former pupil, Russell, on the first edition of Principia Mathematica. In 1910, he resigned his position at Trinity College to protest the dismissal of a colleague because of an adulterous affair. He also ran afoul of a Cambridge by-law limiting the term of a Senior Lecturer to 25 years.
The period between 1910 and 1926 was mostly spent at University College London and Imperial College London, where he taught and wrote on physics, the philosophy of science, and the theory and practice of education. He was a Fellow of the Royal Society since 1903 and was elected to the British Academy in 1931.
Whitehead had opinions about a vast range of human endeavors. These opinions pepper the many essays and speeches he gave on various topics between 1915 and his death.