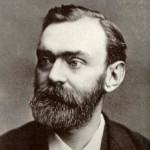 Alfred Nobel was the third son of Immanuel Nobel (1801–1872) and Andriette Ahlsell Nobel (1805–1889). Through his father he was a descendant of the famous Swedish scientist Olaus Rudbeck (1630-1702). Born in Stockholm on 21 October 1833, he went with his family to Saint Petersburg in 1842, where his father (who had invented modern plywood) started a "torpedo" works. Alfred studied chemistry with Professor Nikolai Nikolaevich Zinin. When Alfred was 18, he went to the United States to study chemistry for four years and worked for a short period under John Ericsson.[1] who designed the American Civil War ironclad USS Monitor. In 1859, the factory was left to the care of the second son, Ludvig Nobel (1831–1888), who greatly improved the business. Alfred, returning to Sweden with his father after the bankruptcy of their family business, devoted himself to the study of explosives, and especially to the safe manufacture and use of nitroglycerine (discovered in 1847 by Ascanio Sobrero, one of his fellow students under Théophile-Jules Pelouze at the University of Turin). A big explosion occurred on the 3 September 1864 at their factory in Heleneborg in Stockholm, killing five people. Among them was Alfred's younger brother Emil.
Though Nobel remained unmarried, his biographers note that he had at least three loves. Nobel's first love was in Russia with a girl named Alexandra, who rejected his proposal. In 1876 Austro-Bohemian Countess Bertha Kinsky became Alfred Nobel's secretary. But after only a brief stay she left him to marry her previous lover, Baron Arthur Gundaccar von Suttner. Though her personal contact with Alfred Nobel had been brief, she corresponded with him until his death in 1896, and it is believed that she was a major influence in his decision to include a peace prize among those prizes provided in his will. Bertha von Suttner was awarded the 1905 Nobel Peace prize, 'for her sincere peace activities'.