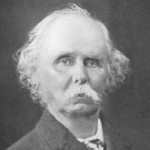 Marshall was born in Clapham, England, July 26, 1842. His father was a bank cashier and a devout Evangelical. Marshall grew up in the London suburb of Clapham and was educated at the Merchant Taylors' School and St John's College, Cambridge, where he demonstrated an aptitude in mathematics, achieving the rank of Second Wrangler in the 1865 Cambridge Mathematical Tripos. Marshall experienced a mental crisis that led him to abandon physics and switch to philosophy. He began with metaphysics, specifically "the philosophical foundation of knowledge, especially in relation to theology.". Metaphysics led Marshall to ethics, specifically a Sidgwickian version of utilitarianism; ethics, in turn, led him to economics, because economics played an essential role in providing the preconditions for the improvement of the working class. Even as he turned to economics, his ethical views continued to be a dominant force in his thinking.
Marshall was elected in 1865 to a fellowship at St John's College at Cambridge, and became lecturer in the moral sciences in 1868. In 1885 he became professor of political economy at Cambridge, where he remained until his retirement in 1908. Over the years he interacted with many British thinkers including Henry Sidgwick, W.K. Clifford, Benjamin Jowett, William Stanley Jevons, Francis Ysidro Edgeworth, John Neville Keynes and John Maynard Keynes. Marshall founded the "Cambridge School" which paid special attention to increasing returns, the theory of the firm, and welfare economics; after his retirement leadership passed to Alfred Pigou and John Maynard Keynes.
Having died aged 81 at his home in Cambridge, Marshall is buried in the Ascension Parish Burial Ground.