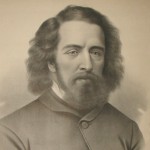 Tennyson was born in Somersby, Lincolnshire, a rector's son and fourth of 12 children. Tennyson and two of his elder brothers were writing poetry in their teens, and a collection of poems by all three were published locally when Alfred was only 17.  Tennyson was first a student of Louth Grammar School for four years (1816–1820) and then attended Scaitcliffe School, Englefield Green and King Edward VI Grammar School, Louth. He entered Trinity College, Cambridge in 1827, where he joined a secret society called the Cambridge Apostles. At Cambridge Tennyson met Arthur Henry Hallam, who became his closest friend. His first publication was a collection of "his boyish rhymes and those of his elder brother Charles" entitled Poems by Two Brothers published in 1827.
In 1829 he was awarded the Chancellor's Gold Medal at Cambridge for one of his first pieces, "Timbuctoo". Reportedly, "it was thought to be no slight honour for a young man of twenty to win the chancellor's gold medal." He published his first solo collection of poems, Poems Chiefly Lyrical in 1830. "Claribel" and "Mariana", which later took their place among Tennyson's most celebrated poems, were included in this volume. Although decried by some critics as overly sentimental, his verse soon proved popular and brought Tennyson to the attention of well-known writers of the day, including Samuel Taylor Coleridge.
Tennyson continued writing into his eighties. He died on 6 October 1892 at Aldworth, aged 83. He was buried at Westminster Abbey.