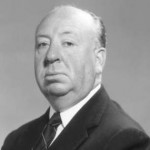 Hitchcock was born on 13 August 1899 in Leytonstone, London, England, the second son and youngest of three children of William Hitchcock, a greengrocer and poulterer, and Emma Jane Hitchcock. Around the age of 5, according to Hitchcock, he was sent by his father to the local police station with a note asking the officer to lock him away for ten minutes as punishment for behaving badly.
Hitchcock's father died when he was 14. In the same year, Hitchcock left St. Ignatius to study at the London County Council School of Engineering and Navigation in Poplar, London. After leaving, he became a draftsman and advertising designer with a cable company called Henley's.
It was while working at Henley's that he first started to dabble creatively. Upon the formation of the company's in-house publication The Henley Telegraph in 1919, Hitchcock started to submit short articles, eventually becoming one of its most prolific contributors. His first piece was Gas (1919), published in the very first issue, in which a young woman imagines that she is being assaulted one night in Paris. His second piece was The Woman's Part (1919), which involves the conflicted emotions a husband feels as he watches his wife, an actress, perform onstage.
Hitchcock became intrigued by photography and started working in film production in London, working as a title-card designer for the London branch of what would become Paramount Pictures. In 1920, he received a full-time position at Islington Studios with its American owner, Famous Players-Lasky, and their British successor, Gainsborough Pictures, designing the titles for silent movies. His rise from title designer to film director took five years.