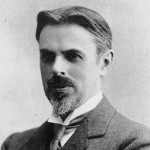 Housman was born at Valley House in Fockbury. Housman was educated first at King Edward's School, Birmingham, then Bromsgrove School, where he acquired a strong academic grounding and won prizes for his poetry. In 1877, he won an open scholarship to St John's College, Oxford, where he studied classics. After Oxford, Jackson(friend) got a job as a clerk in the Patent Office in London and arranged a job there for Housman as well. They shared a flat with Jackson's brother Adalbert until 1885 when Housman moved to lodgings of his own.He gradually acquired such a high reputation that in 1892 he was offered the professorship of Latin at University College London, which he accepted. Many years later, the UCL academic staff common room was dedicated to his memory as the Housman Room.
The pleasures Housman enjoyed included gastronomy, flying in aeroplanes, and frequent visits to France, where he read "books which were banned in Britain as pornographic". In 1911, he took the Kennedy Professorship of Latin at Trinity College, Cambridge, where he remained for the rest of his life. During 1903–1930, he published his critical edition of Manilius's Astronomicon in five volumes. He also edited works of Juvenal (1905) and Lucan (1926). Many colleagues were unnerved by his scathing critical attacks on those whom he found guilty of shoddy scholarship.
Housman died aged 77, in Cambridge. His ashes are buried near St Laurence's Church, Ludlow, Shropshire. The University of Worcester has acknowledged Housman's local connection by naming a new building after him.