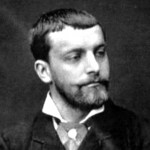 Musset was born on 11 December 1810 in Paris. His family was upper-class but poor and his father worked in various key government positions, but never gave his son any money. Early indications of Musset's boyhood talents were seen by his fondness for acting impromptu mini-plays based upon episodes from old romance stories he had read. Alfred de Musset entered the collège Henri-IV at the age of nine, where in 1827 he won the Latin essay prize in the Concours général. With the help of Paul Foucher, Victor Hugo's brother-in-law, he began to attend, at the age of 17, the Cénacle, the literary salon of Charles Nodier at the Bibliothèque de l'Arsenal. After attempts at careers in medicine, law, drawing, English and piano, he became one of the first Romantic writers, with his first collection of poems, Contes d'Espagne et d'Italie. By the time he reached the age of 20, his rising literary fame was already accompanied by a sulphurous reputation fed by his dandy side.
He was the librarian of the French Ministry of the Interior under the July Monarchy. During this time he also involved himself in polemics during the Rhine crisis of 1840, caused by the French prime minister Adolphe Thiers. Musset was dismissed from his post as librarian by the new minister Ledru-Rollin after the revolution of 1848. He was however appointed librarian of the Ministry of Public Instruction in 1853.
Musset received the Légion d'honneur on 24 April 1845, at the same time as Balzac, and was elected to the Académie française in 1852. Alfred de Musset died in his sleep in Paris on 2 May 1857. The cause was heart failure, the combination of alcoholism and a longstanding aortic insufficiency.