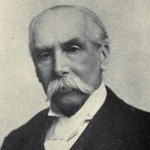 Alfred Austin was born in Headingley, near Leeds, on 30 May 1835. His father, Joseph Austin, was a merchant in Leeds; his mother, a sister of Joseph Locke, M.P. for Honiton. Austin was educated at Stonyhurst College, and University of London, from which he graduated in 1853. He became a barrister in 1857 before leaving law to concentrate on literature.
On Tennyson's death in 1892 it was felt that none of the then living poets, except Algernon Charles Swinburne or William Morris, who were outside consideration on other grounds, was of sufficient distinction to succeed to the laurel crown, and for several years no new poet-laureate was nominated. In the interval the claims of one writer and another were assessed, but eventually, in 1896, Austin was appointed to the post after Morris had declined it.
Broadus writes that the choice of Austin for poet-laureate had much to do with Austin's friendship with Lord Salisbury, his position as an editor and leader writer, and his willingness to use his poetry to support the government. Sir Owen Seaman (1861-1936) gave added currency to the supposed connection with Lord Salisbury in his poem, 'To Mr Alfred Austin', In Cap and Bells, London & New York, 1900, 9.
Austin died of unknown causes in Ashford, Kent, England.