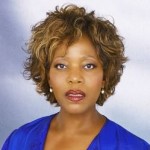 Alfre Ette Woodard is an American film, stage, and television actress. She has been nominated once for an Academy Award and Grammy Awards, 17 times for Emmy Awards, and has also won a Golden Globe and three Screen Actors Guild Awards. She is known for her role in films such as Cross Creek, Miss Firecracker, Grand Canyon, Passion Fish, Primal Fear, Star Trek: First Contact, Miss Evers' Boys, K-PAX, Radio, Take the Lead and The Family That Preys. Woodard was born in Tulsa, Oklahoma to Constance, a homemaker, and Marion H. Woodard, an entrepreneur and interior designer. Woodard attended Bishop Kelley High School, a private Catholic school in Tulsa. She studied drama at Boston University, from which she graduated.