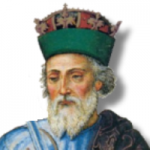 Born in Toledo, Spain, Alfonso was the eldest son of Ferdinand III of Castile and Elisabeth of Hohenstaufen, known in Spain as Beatriz de Suabia, through whom he was a cousin of Frederick II, Holy Roman Emperor, to whom Alfonso is often compared. His maternal grandparents were Philip of Swabia and Irene Angelina. Little is known about his upbringing, but he was most likely raised in Toledo. He began his career as a soldier, under the command of his father, when he was only sixteen years old.
After the election of Theobald I as king of Navarre, his father tried to arrange a marriage for Ferdinand with Theobald's daughter, Blanche of Navarre, but the move was unsuccessful. So, in 1240, he married Maior Guillen de Guzman, but the marriage was later annulled and their issue declared illegitimate. In the same period (1240–1250) he conquered several Muslim strongholds in Al-Andalus alongside his father, such as Murcia, Alicante and Cadiz.
In 1249, Alfonso X married Violante of Aragon, the daughter of King James I of Aragon and Yolande of Hungary, although betrothed already in 1246. At the same time he also had a romantic relationship with Sofia Mayor Guillén de Guzmán, who bore to him illegitimate daughter Beatrice.
He died defeated and deserted at Seville in 1284, leaving a will, by which he endeavored to exclude Sancho, and a heritage of civil war.