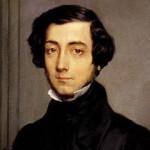 Alexis de Tocqueville came from an old Norman aristocratic family with ancestors who participated in the Battle of Hastings in 1066. Tocqueville, who despised the July Monarchy (1830–1848), began his political career at the start of the same period, 1830. Thus, he became deputy of the Manche department (Valognes), a position which he maintained until 1851. In parliament, he defended abolitionist views and upheld free trade, while supporting the colonisation of Algeria carried on by Louis-Philippe's regime. Tocqueville was also elected general counsellor of the Manche in 1842, and became the president of the department's conseil général between 1849 and 1851.
Tocqueville also made an observational tour of England, producing Memoir on Pauperism. In 1841 and 1846, he traveled to Algeria. His first travel inspired his Travail sur l'Algérie, in which he criticized the French model of colonisation.
In 1835 de Tocqueville made a journey through Ireland. His observations provide one of the best pictures of how Ireland stood before the Great Famine 1845-1849. After the fall of the July Monarchy during the February 1848 Revolution, Tocqueville was elected a member of the Constituent Assembly of 1848, where he became a member of the Commission charged with the drafting of the new Constitution of the Second Republic. He defended bicameralism and the election of the President of the Republic by universal suffrage. As the countryside was thought to be more conservative than the labouring population of Paris, universal suffrage was conceived as a means to counteract the revolutionary spirit of Paris.
A longtime sufferer from bouts of tuberculosis, Tocqueville would eventually succumb to the disease on April 16, 1859. He was buried in the Tocqueville cemetery in Normandy.