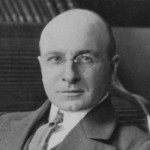 Born in Sainte-Foy-lès-Lyon, Rhône, Carrel was raised in a devout Catholic family and was educated by Jesuits, though he no longer practiced his religion when he entered the university. He nevertheless succeeded in introducing an acerbic ideological strain into French Catholic mentality. He received his medical degree from Université de Lyon, and practiced in France and in the United States at the University of Chicago and the Rockefeller Institute for Medical Research. He developed new techniques in vascular sutures and was a pioneer in transplantology and thoracic surgery. Alexis Carrel was also a member of learned societies in the U.S., Spain, Russia, Sweden, the Netherlands, Belgium, France, Vatican City, Germany, Italy and Greece and received honorary doctorates from Queen's University of Belfast, Princeton University, California, New York, Brown University and Columbia University.
In 1906 he joined the newly-formed Rockefeller Institute of Medical Research in New York where he spent the rest of his career. In the 1930s, Carrel and Charles Lindbergh became close friends not only because of the years they worked together but also because they shared personal, political, and social views. Carrel spent his life promoting spiritualism, though he did not embrace the Catholicism of his youth. In 1939 he met with Trappist monk Alexis Presse on a recommendation. Though Carrel was skeptical about meeting with a priest Presse ended up having a profound influence on the rest of Carrel's life. He summoned Presse to administer the Catholic Sacraments on his death bed in November 1944.