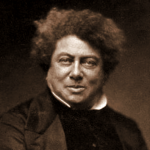 Alexandre Dumas was born in Villers-Cotterêts in the department of Aisne, in Picardy, France. In 1822, after the restoration of the monarchy, 20-year old Alexandre Dumas moved to Paris, where he worked at the Palais Royal in the office of Louis Philippe, Duke of Orléans.
While in Paris, Dumas began writing for magazines and plays for the theatre. His first play, Henry III and His Courts, was produced in 1829, and was met with acclaim. The next year his second play, Christine, was equally popular, and he was financially able to write full-time. In 1830 he participated in the Revolution which ousted Charles X, and which replaced him on the throne with Dumas' former employer, the Duke of Orléans, who would rule as Louis-Philippe, the Citizen King. After writing more successful plays, he turned his efforts to novels. Although attracted to an extravagant lifestyle, and always spending more than he earned, Dumas proved to be an astute marketer. Since newspapers wanted many serial novels, in 1838 Dumas rewrote one of his plays to create his first serial novel, titled Le Capitaine Paul, which led to his forming a production studio that turned out hundreds of stories, all subject to his personal input and direction.
In 1851 Dumas fled to Brussels, Belgium, to escape his creditors, and from there he traveled to Russia, where French was the second language, and where his writings were enormously popular. Dumas spent two years in Russia, before moving on to seek adventure and fodder for more stories. In March 1861 the kingdom of Italy was proclaimed, with Victor Emmanuel II as its king. For the next three years Alexandre Dumas would be involved in the fight for a united Italy, founding and leading a newspaper, named Indipendente, and returning to Paris in 1864.