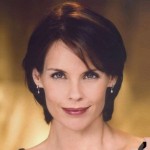 Paul was born in New York City, the daughter of Sarah, a social worker, and Mark Paul, an investment banker.
Alexandra has starred in over 70 films and television shows. Apart from Baywatch, Paul is known for movies such as Paper Dolls (1982) with Darryl Hannah, Christine (1983), based on the book by Stephen King; the bicycle-racing film American Flyers (1985) with Kevin Costner and the film parody of the classic television series Dragnet starring Tom Hanks and Dan Aykroyd. She has also hosted non-fiction TV shows, including WE's Winning Women and a southern California local environmentalism show, Earth Talk Today. Paul is a competitive endurance athlete. She competed at the 1997 Ironman Triathlon in Hawaii, a grueling 2.44-mile (3.93 km) swim, 112-mile (180 km) bike ride, and 42.195-kilometre (26.219 mi) marathon, which she completed in 13:18:52.
Alexandra has starred in 2 films with Pierce Brosnan, "Death Train" and "Nightwatch". She played Andy Garcia's and Jeff Bridges' lover in "Eight Million Ways to Die", directed by Hal Ashby. Since 1999, she has starred in 14 films for Lifetime Network. She has also starred in the Fox TV series "Fire Company 132" and appeared on the last 8 episodes of Melrose Place. She guest starred on the TV series "Mad Men" in 2008.
Paul co-wrote and co-produced two documentaries: Jampacked, a documentary on the world population crisis, and The Cost of Cool: Finding Happiness in a Materialistic World. Jampacked received a Bronze Apple Award and first place recognition at the EarthVision Environmental Film and Video Festival. The Cost of Cool won a CINE Golden Eagle Award. In 2011, she was a spokesperson for the Chevy Volt, a plug in car.