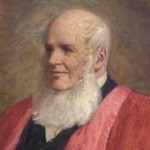 He was born Alexander John Sharpe in Hoxton, Middlesex to a wealthy family. His father, James Birch Sharpe, was a notable artist and physician. His mother, Ann Ellis, was from a noble background herself. Alexander was educated at Shrewsbury School, Eton College and Trinity College, Cambridge. Initially trained in mathematics and the classics, he became a well-known phonetician of his time. Through his work in phonetics he also became interested in vocal pitch and by extension in musical pitch as well as speech and song.
Ellis is also noted for translating and extensively annotating Hermann Helmholtz's On the Sensations of Tone. The second edition of this translation, published in 1885, contains an appendix which summarizes Ellis' own work on related matters. In his writings on musical pitch and scales, Ellis elaborates his notion and notation of cents for musical intervals which became especially influential in Comparative musicology, a predecessor of ethnomusicology. Analyzing the scales of various extra-European musical traditions, Ellis also showed that the diversity of tone systems cannot be explained by a single physical law, as had been argued by earlier scholars.
In part V of his work On early English pronunciation, he applied the Dialect Test across Britain, and distinguished forty-two different dialects in England and the Scottish Lowlands. There are claims that Ellis himself was tone deaf, i.e. could not distinguish different pitches with his own ears. Today, this claim is often not supported anymore.
He was acknowledged by Shaw as the prototype of Professor Henry Higgins of Pygmalion. He was elected in June 1864 a Fellow of the Royal Society.