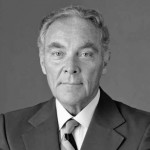 Haig was born in Bala Cynwyd, Pennsylvania. He attended Saint Joseph's Preparatory School in North Philadelphia. He then studied at the University of Notre Dame for two years, before transferring to the United States Military Academy, where he graduated in 1947. Haig later earned a Master of Business Administration degree from Columbia Business School in 1955 and a Master of Arts degree in international relations from Georgetown University in 1961. His thesis examined the role of military officers in making national policy.
As a young officer, Haig served on the staff of General Douglas MacArthur in Japan. In the early days of the Korean War, Haig was responsible for maintaining General MacArthur's situation map and briefing MacArthur each evening on the day's battlefield events. Haig later served (1950–51) with the X Corps, as aide to MacArthur's Chief of Staff, the controversial General Edward Almond. Haig participated in four Korean War campaigns, including the Battle of Inchon, the Battle of Chosin Reservoir, and the evacuation of Hŭngnam as Almond's aide.
In 1966, Haig took command of a battalion of the 1st Infantry Division in Vietnam. On May 22, 1967, Lieutenant Colonel Haig was awarded the Distinguished Service Cross, the US Army's second highest medal for valor, by General William Westmoreland as a result of his actions during the Battle of Ap Gu in March 1967. Haig was also awarded the Distinguished Flying Cross and the Purple Heart during his tour in Vietnam, and was eventually promoted to Colonel, becoming a brigade commander of the 1st Infantry Division (United States) in Vietnam.
On February 19, 2010, a hospital spokesman revealed that the 85-year-old Haig had been hospitalized at Johns Hopkins Hospital in Baltimore since January 28 and remained in critical condition. On February 20, Haig died at the age of 85 from complications from a staphylococcal infection that he had prior to admission.