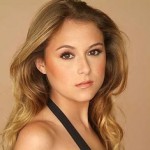 Alexa Ellesse PenaVega is an American actress and singer. She is best known for her role as Carmen Cortez in the Spy Kids film series and Shilo Wallace in the film Repo! the Genetic Opera. In 2009, she starred as the title character Ruby Gallagher in the ABC Family series Ruby & The Rockits. Alexa Vega was born in Miami, Florida. Her father is Colombian and her mother, Gina Rue, is an American former model. In 1996, Vega starred as young Jo Harding in Twister. She guest-starred in numerous television shows and films, including ER, Follow the Stars Home, Ghost Whisperer, and The Bernie Mac Show. In 2003, she was named one of that year's hottest teen celebrities in the July 2003 issue Vanity Fair. In 2004, Vega finished filming two films: Sleepover and State's Evidence. As of 2013, Vega finished work on the films 23 Blast, Machete Kills, Bounty Killer, Wicked Blood, The Remaining and The Hunters which will have release dates throughout 2013 and 2014.