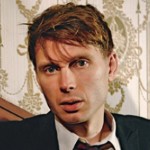 Alexander Paul Kapranos Huntley, commonly known as Alex Kapranos, is an English musician, who is the lead singer and the guitarist of the Glasgow band Franz Ferdinand. He moved to the North East of England when he was three months old, spending his early childhood in Washington, Tyne and Wear and South Shields, his mother's home town, and spent many summer holidays in his father's native Greece. In 1980, he moved with his family to Edinburgh then to Glasgow in 1984 where he attended Bearsden Academy. At the age of seventeen, Kapranos attended the University of Aberdeen to study Theology. After dropping out, he continued his studies at the University of Strathclyde, eventually gaining a BA. In 2005, he was awarded Strathclyde's Alumnus of the Year. He worked as a chef, barman, music promoter, driver, welder and lecturer prior to finding fame with Franz Ferdinand.