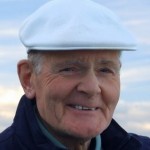 Campbell was born in Glasgow to a family who originated from the Hebrides. During World War II he met American, Polish and Australian servicemen who were based in Glasgow and he developed an interest in the songs they sang. On leaving school, he worked for the Civil Service and had a successful career until an occasion when he lost his temper and had to leave. With the savings from his employment, he enrolled for a course at the Sorbonne, in Paris. However, he quickly ran out of money and began busking in the streets to support himself, playing the guitar and singing Leadbelly songs and Scottish folk songs.
He met the American folk musician Derroll Adams who found him a regular engagement, playing in a café, but Campbell also continued busking the streets. He made regular return trips to Britain in the 1950s, appearing at Alexis Korner's "Blues and Barrelhouse" club and other skiffle and folk music venues that were opening around the country. Back in Paris, a new generation of folk musicians, such as Davey Graham and Wizz Jones followed in his footsteps. Campbell became involved in the folk music revival taking place in London and met Ewan MacColl, who was an influential figure in the folk movement.
By 1961 Campbell was playing folk clubs in London, including Les Cousins. He toured Germany several times, and other parts of Europe. For several years he lived in Denmark, first in Skagen, and later in Tonder. By the early 1980s he had throat cancer and could hardly speak. He died of tuberculosis in Denmark on 3 January 1987.