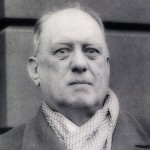 Aleister was born as Edward Alexander Crowley at 30 Clarendon Square in Royal Leamington Spa, Warwickshire, England. Aged 8, Aleister was sent to H.T. Habershon's evangelical Christian boarding school in Hastings, and then to a preparatory school in Cambridge run by the Reverend Hendry d'Arcy Champney, whom Aleister considered a sadist. Inheriting his father's wealth, he was subsequently sent to Ebor School in Cambridge, a private Plymouth Brethren school, but was expelled for misbehaviour. Following this he attended Malvern College and then Tonbridge School, both of which he despised and soon left after only a few terms, instead beginning studies at Eastbourne College.
In 1895 Crowley, who soon adopted the new name of Aleister over his birth name of Edward, began a three year course at Trinity College, Cambridge, where he was entered for the Moral Science Tripos studying philosophy, but with approval from his personal tutor he switched to English literature, which was not then a part of the curriculum offered. Crowley largely spent his time at university engaged in his pastimes, one of which was mountaineering; he went on holiday to the Alps to do so every year from 1894 to 1898, and various other mountaineers who knew him at this time recognised him as "a promising climber, although somewhat erratic". Another of his hobbies was writing poetry, which he had been doing since the age of 10, and in 1898 he privately published one hundred copies of one of his poems, Aceldama, but it was not a particular success.
Crowley died at Netherwood on 1 December 1947 at the age of 72.