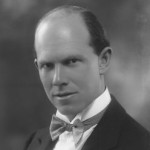 Waugh was born in London, and educated at Sherborne School, a public school in Dorset. The result of his experiences was his first, semi-autobiographical novel, The Loom of Youth (1917), in which he remembered and reflected on his schooldays. The book was clearly inspired by The Harrovians by Arnold Lunn, published in 1913 and discussed at some length in The Loom of Youth.
The Loom of Youth was so controversial at the time that he remains the only former pupil to be expelled from the old boys society. It was also a best seller. When the book was published Waugh was serving in France, although he did not see action in the First World War until Passchendaele. He was subsequently captured by the Germans near Arras and spent the rest of the war in a prisoner-of-war camp in Karlsruhe. He went on to a career as a successful author, although never as successful or innovative as his younger brother. He lived much of his life overseas, in exotic places such as Tangier – a lifestyle made possible by his second marriage, to a rich Australian. His work, possibly in consequence, tends to be reminiscent of Somerset Maugham, although without Maugham's huge popular success. Nevertheless, his 1957 novel Island in the Sun was a best-seller, as was his 1973 novel, A Fatal Gift.
Alec Waugh was the author of In Praise of Wine & Certain Noble Spirits (1959), an amusing and discursive guide to the major wine types, and Wines and Spirits, a 1968 book in the Time-Life series Foods of the World. This was not a stretch as he was a noted connoisseur. Waugh is said to have invented the cocktail party when he was active in London social life in the 1920s when he served rum swizzles to astonished friends who thought they had come for tea. Within eighteen months, early evening drinks had become a widespread social entertainment.