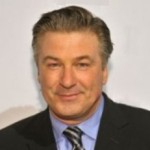 Baldwin was born on Long Island, New York, the son of Carolyn Newcomb and Alexander Rae Baldwin, Jr., a high school history/social studies teacher and football coach. Baldwin attended Alfred G. Berner High School in Massapequa, Long Island, and played football there under Coach Bob Reifsnyder, who is in the College Football Hall of Fame. He worked as a busboy at the famous New York City disco Studio 54. Baldwin attended George Washington University from 1976 to 1979. He then transferred to New York University to study acting at the Lee Strasberg Theatre Institute under Elaine Aiken and Geoffrey Horne. He returned to NYU in 1994 and graduated with a BFA that year.
Baldwin made his Broadway debut in 1986, in a revival of Joe Orton's Loot alongside theater veterans Zoë Wanamaker, Željko Ivanek, Joseph Maher and Charles Keating. His performance as Stanley Kowalski in the latter garnered him a Tony Award nomination for Best Actor. Baldwin also received an Emmy nomination for the 1995 television version of the production, in which both he and Jessica Lange reprised their roles, alongside John Goodman and Diane Lane. In 1998, Baldwin played the title role in Macbeth at the Public theater alongside Angela Bassett and Liev Schreiber in a production directed by George C. Wolfe. In 2004, Baldwin starred in a revival of Twentieth Century with Anne Heche.
Baldwin's first major acting role was as Billy Aldrich on the daytime soap opera The Doctors from 1980 to 1982. In fall 1983, he starred in the short-lived television series Cutter to Houston. He then co-starred in the television series Knots Landing from 1984 to 1986. In 1986, Baldwin starred in Dress Gray, a four-hour made-for-television miniseries, as an honest cadet sergeant who tries to solve the mystery of a murdered gay classmate. Between 1998 and 2003, Baldwin was the U.S. narrator for the children's show Thomas the Tank Engine & Friends, narrating all 52 episodes of Series 5 and Series 6.