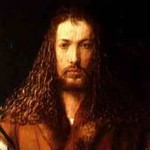 Albrecht Dürer born in Nuremberg,Holy Roman Empire. Dürer's godfather was Anton Koberger, who left goldsmithing to become a printer and publisher in the year of Dürer's birth. He quickly became the most successful publisher in Germany, eventually owning twenty-four printing-presses and having many offices in Germany and abroad. His most famous publication was the Nuremberg Chronicle, published in 1493 in German and Latin editions. It contained an unprecedented 1,809 woodcut illustrations by the Wolgemut workshop. Dürer may well have worked on some of these, as the work on the project began while he was with Wolgemut.
After a few years of school, Dürer started to learn the basics of goldsmithing and drawing from his father. Though his father wanted him to continue his training as a goldsmith, he showed such a precocious talent in drawing that he started as an apprentice to Michael Wolgemut at the age of fifteen in 1486.
After completing his term of apprenticeship, Dürer followed the common German custom of taking Wanderjahre—in effect gap year—in which the apprentice learned skills from artists in other areas; Dürer was to spend about four years away. He left in 1490, possibly to work under Martin Schongauer, the leading engraver of Northern Europe, but who died shortly before Dürer's arrival at Colmar in 1492. It is unclear where Dürer travelled in the intervening period, though it is likely that he went to Frankfurt and the Netherlands. In Colmar, Dürer was welcomed by Schongauer's brothers, the goldsmiths Caspar and Paul and the painter Ludwig. In 1493 Dürer went to Strasbourg, where he would have experienced the sculpture of Nikolaus Gerhaert. Dürer's first painted self-portrait was painted at this time, probably to be sent back to his fiancée in Nuremberg.
The other, a work on city fortifications, was published in 1527. "The Four Books on Human Proportion" were published posthumously, shortly after his death in 1528 at the age of fifty-six