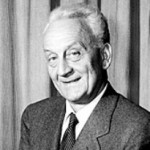 Szent-Györgyi was born in Budapest, Kingdom of Hungary, Austro-Hungarian empire in 1893. Szent-Györgyi began his studies at the Semmelweis University in 1911, but soon became bored with classes and began research in his uncle's anatomy lab. His studies were interrupted in 1914 to serve as an army medic in World War I. In 1916, disgusted with the war, Szent-Györgyi shot himself in the arm, claimed to be wounded from enemy fire, and was sent home on medical leave. He was then able to finish his medical education and received his MD in 1917.
After the war, Szent-Györgyi began his research career in Bratislava. He switched universities several times over the next few years, finally ending up at the University of Groningen, where his work focused on the chemistry of cellular respiration. This work landed him a position as a Rockefeller Foundation fellow at Cambridge University. He received his PhD from Cambridge in 1927 for work on isolating an organic acid, which he then called "hexuronic acid", from adrenal gland tissue. He accepted a position at the University of Szeged in 1930. In 1937, he received the Nobel Prize in Physiology or Medicine "for his discoveries in connection with the biological combustion process with special reference to vitamin C and the catalysis of fumaric acid". Albert Szent-Györgyi offered all of his Nobel prize money to Finland in 1940.
In 1938, he began work on the biophysics of muscle movement. He found that muscles contain actin, which when combined with the protein myosin and the energy source ATP, contract muscle fibers. In 1947, Szent-Györgyi established the Institute for Muscle Research at the Marine Biological Laboratory in Woods Hole, Massachusetts with financial support from Hungarian businessman Stephen Rath.
Szent-Györgyi died in Woods Hole, Massachusetts on October 22, 1986.