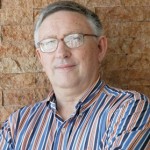 Woods was born into a working-class family in Swansea, South Wales and grew up in the Townhill and Penlan areas of the city. At the age of 16 he joined the Young Socialists and became a Marxist, becoming a supporter of the Trotskyist Militant tendency within the Labour Party. He studied Russian at Sussex University and later in Sofia (Bulgaria) and at the Moscow State University (MGU). Wood's work in Brighton for the Militant tendency established an important base of support at the university and in the town. He later moved back to south Wales, becoming the first regional full timer for the organisation. He, his wife, and two small daughters moved to Spain in the early 1970s where his well-known political stance placed him amongst those struggling against the Francisco Franco dictatorship, where he worked to establish the Spanish section of the Committee for a Workers International (CWI). Woods speaks several languages, including Italian, English, Spanish, French, German and Russian. His daughter is socialist and trade union campaigner Lizzie Woods.
In the early 1990s Woods and his mentor, Ted Grant, were expelled from the Militant tendency and its parent organization, the Committee for a Workers' International, over what they considered to be the ultraleft turn of this organisation when it decided to split from the Labour Party. The minority group led by Ted Grant also argued that a decline in emphasis on political education, as well as the development of a bureaucratic clique arount Peter Taaffe was damaging Militant. Grant and Woods and their supporters internationally formed the Committee for a Marxist International in 1992, which was later to be known as the International Marxist Tendency (IMT), and remained active in the Labour Party.
Woods was the editor for some years of the Marxist journal Socialist Appeal, published in London. Alongside Lal Khan, he is currently a leading theoretician in the IMT and editor of its website In Defence of Marxism. He writes on the current political situation in Venezuela and the tasks to be carried out by revolutionaries elsewhere.