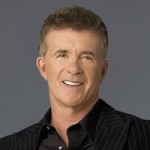 Thicke was born in Kirkland Lake, Ontario, Canada, the son of Joan, a nurse, and William Jeffery, a stockbroker. He graduated from Elliot Lake Secondary School in 1965, and was elected the homecoming king. He went on to attend the University of Western Ontario, where he joined the Delta Upsilon fraternity. Thicke hosted a Canadian game show on CFCF-TV in Montreal called First Impressions in the late 1970s and the prime time celebrity game show Animal Crack-Ups in the late 1980s. In 1997, he hosted a television version of the board game Pictionary.
Norman Lear hired Thicke to produce and head the writing staff of Fernwood 2-Night, a tongue-in-cheek talk show based on characters from Lear's earlier show, Mary Hartman, Mary Hartman. Thicke was also the host of his own popular talk show in Canada during the early 1980s, called The Alan Thicke Show. The show at one point spawned a prime time spin-off titled Prime Cuts, which consisted of edited highlights from the talk show. Based on the success of his talk show, Thicke was signed to do an American syndicated late-night talk show Thicke of the Night.
Apart from Growing Pains, Thicke also appeared on the American television series Hope & Gloria, which lasted 35 episodes. He played a lead role in the Not Quite Human trilogy of made for TV movies. In 2004, Thicke hosted the Miss Universe Canada pageant. In April 2006, he hosted Celebrity Cooking Showdown on NBC, in which celebrities were teamed with famous chefs in a cooking competition. n August 2006 and 2007, Thicke made a few appearances as talk show host Rich Ginger on The Bold and the Beautiful. Thicke also had a cameo appearance in the 2007 movie Alpha Dog as the father of the lead character's girlfriend.
In October 2010, he was on the celebrity version of Don't Forget the Lyrics, where he played for the charities ProCon.org and the Alan Thicke Center for diabetes research.