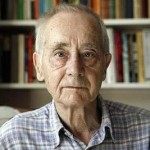 Sillitoe was born in Nottingham, to working class parents. Like Arthur Seaton, the anti-hero of his first novel Saturday Night and Sunday Morning, his father worked at the Raleigh Bicycle Company factory. He left school at the age of 14 and worked at the Raleigh factory for the next four years, spending his free time reading. He then joined the Royal Air Force, serving as a wireless operator in Malaya. After returning to England, he was discovered to have tuberculosis and spent 16 months in an RAF hospital. Pensioned off at age 21 on 45 shillings a week, he lived in France and Spain for seven years in an attempt to recover. In 1955, while living in Mallorca with American poet Ruth Fainlight, whom he married in 1959, and in contact with the poet Robert Graves, Sillitoe started work on Saturday Night and Sunday Morning, which was published in 1958.
Sillitoe's story The Loneliness of the Long Distance Runner, which concerns the rebellion of a borstal boy with a talent for running, won the Hawthornden Prize in 1959. It was also adapted to film, in 1962, this time directed by Tony Richardson and starring Tom Courtenay. In 1990, Sillitoe was awarded an honorary degree from Nottingham Trent University. The city's older Russell Group university, the University of Nottingham, also awarded him an honorary D.Litt in 1994. Sillitoe wrote many novels, and several volumes of poetry. His 1995 autobiography, Life Without Armour, was critically acclaimed on publication, and offers a view into his squalid childhood.
In 2007 Gadfly in Russia, an account of his travels in Russia spanning 40 years, was published. In 2008 London Books republished A Start in Life as part of its London Classics series and to mark the author's 80th birthday. Sillitoe appeared on BBC Radio 4's Desert Island Discs on 25 January 2009.
On 25 April 2010 Sillitoe died at Charing Cross Hospital in London of cancer.