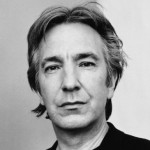 Rickman was born in South Hammersmith, London, to a working class family. Rickman attended Derwentwater Primary School, in Acton, a school that followed the Montessori method of education. Rickman excelled at calligraphy and watercolour painting, and from Derwentwater Junior School he won a scholarship to Latymer Upper School in London, where he started getting involved in drama. After leaving Latymer, Rickman attended Chelsea College of Art and Design and then the Royal College of Art. This education allowed him to work as a graphic designer for the radical newspaper the Notting Hill Herald, which he considered a more stable occupation than acting.
After graduation, Rickman and several friends opened a graphic design studio called Graphiti, but after three years of successful business, he decided that if he were to ever explore acting professionally, it was now or never. This led him to write a letter to the Royal Academy of Dramatic Art (RADA) requesting an audition and was awarded a place in RADA which he attended from 1972–74. While there, he studied Shakespeare's works and supported himself by working as a dresser for Sir Nigel Hawthorne and Sir Ralph Richardson, and left after winning several prizes, including the Emile Littler Prize, the Forbes Robertson Prize, and the Bancroft Gold Medal.
After graduating from RADA, Rickman worked extensively with various British repertory and experimental theatre groups on productions including The Seagull and Snoo Wilson's The Grass Widow at the Royal Court Theatre, and has appeared three times at the Edinburgh International Festival. In 1978, he played with the Court Drama Group, performing in several plays, most notably Romeo And Juliet and A View from the Bridge. While working with the Royal Shakespeare Company (RSC) he starred in, among other things, As You Like It.
Rickman is known for his film performances as Hans Gruber in Die Hard, Severus Snape in the Harry Potter film series, Éamon de Valera in Michael Collins, and Metatron in Dogma.