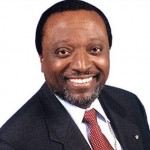 Alan Lee Keyes is an American conservative political activist, author, former diplomat, and perennial candidate for public office. A doctoral graduate of Harvard University, Keyes began his diplomatic career in the U.S. Foreign Service in 1979 at the United States consulate in Bombay, India, and later in the American embassy in Zimbabwe. He ran for President of the United States in 1996, 2000, and 2008, and was a Republican nominee for the U.S. Senate in 1988, 1992, and 2004. Keyes was appointed Ambassador to the Economic and Social Council of the United Nations by President Ronald Reagan, and served as Reagan's Assistant Secretary of State for International Organization Affairs from 1985 to 1987; in his capacities as a UN ambassador, among Keyes's accomplishments was contributing to the Mexico City Policy. Keyes also hosted a radio talk show, The Alan Keyes Show: America's Wake-Up Call, and a television commentary show on the MSNBC cable network, Alan Keyes Is Making Sense.