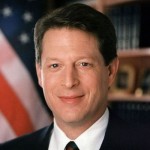 Albert Gore, Jr. was born in Washington, D.C., the second of two children of Albert Gore, Sr., a U.S. Representative who later served as a U.S. Senator from Tennessee, and Pauline LaFon Gore, one of the first women to graduate from Vanderbilt University Law School. Gore is partly descended from Scots-Irish immigrants who first settled in Virginia in the mid-17th-century, and moved to Tennessee after the Revolutionary War. His older sister Nancy LaFon Gore, who was born in 1938, died of lung cancer in 1984. During the school year he lived with his family in The Fairfax Hotel in the Embassy Row section in Washington D.C. Gore attended the all-boys St. Albans School in Washington, D.C. from 1956 to 1965, a prestigious feeder school for the Ivy League. He was the captain of the football team, threw discus for the track and field team, and participated in basketball, art, and government. He graduated 25th in his class of 51, applied to only one college, Harvard, and was accepted.