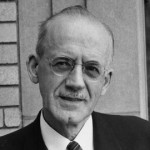 Aiden Wilson Tozer was an American Christian pastor, preacher, author, magazine editor, and spiritual mentor. For his work, he received two honorary doctorate degrees. Hailing from a tiny farming community in western La Jose, Pennsylvania, his conversion was as a teenager in Akron, Ohio. In 1919, five years after his conversion, and without formal theological training, Tozer accepted an offer to pastor his first church. This began 44 years of ministry, associated with the Christian and Missionary Alliance, a Protestant evangelical denomination; 33 of those years were served as a pastor in a number of churches. Among the more than 40 books that he authored, at least two are regarded as Christian classics: The Pursuit of God and The Knowledge of the Holy. His books impress on the reader the possibility and necessity for a deeper relationship with God. Prayer was of vital personal importance for Tozer. "His preaching as well as his writings were but extensions of his prayer life," comments his biographer, James L. Snyder, in the book, In Pursuit of God: The Life Of A.W. Tozer. "He had the ability to make his listeners face themselves in the light of what God was saying to them," writes Snyder.