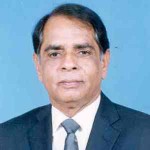 Ahmed Ali was Pakistani  novelist, poet, critic, translator, diplomat and scholar. His writings include Twilight in Delhi, his first novel. Born in Delhi, India, Ahmed Ali was educated at Aligarh and Lucknow universities, graduating with first-class and first in the order of merit in both B.A., 1930 and M.A. English, 1931. He taught at leading Indian universities including Lucknow and Allahabad from 1932–46 and joined the Bengal Senior Educational Service as professor and head of the English Department at Presidency College, Calcutta. During the Partition of India, he was the British Council Visiting Professor to the University of China in Nanking as appointed by the British government of India. In 1948, he moved to Karachi. Later, he was appointed Director of Foreign Publicity, Government of Pakistan. At the behest of Prime Minister Liaquat Ali Khan, he joined the Pakistan Foreign Service in 1950.