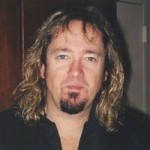 Adrian Frederick Smith is an English musician, best known as one of the three guitarists in the heavy metal band, Iron Maiden, for whom he regularly writes and, along with bassist Steve Harris, performs backing vocals on some songs. Growing up in Camden, London, Smith gained an interest in rock music at 15 and formed a friendship with future Iron Maiden guitarist Dave Murray, who would inspire Smith to take up the guitar himself. Upon leaving school at 16, he formed his own band, Urchin, which he would lead until their demise in 1980. Having already been offered a position as their second guitarist the previous year, Smith joined Iron Maiden in November 1980, replacing Dennis Stratton. Following a short-lived solo project entitled A.S.A.P, he left Iron Maiden in 1990, forming his own group, Psycho Motel, before joining Bruce Dickinson's solo outfit in 1997. Along with Dickinson, he returned to Iron Maiden in 1999, after which the band gained renewed success, and recently formed the side project, Primal Rock Rebellion.