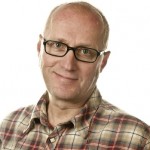 Adrian Charles Ade Edmondson is an English comedian, actor, writer, musician, television presenter and director. Edmondson, the second of four children, was born in Bradford, West Riding of Yorkshire. As a child, he spent time living with his family in a variety of places including Cyprus, Bahrain, and Uganda, where his father was a teacher in the armed forces. Later, for a period in the mid-1980s, his father became the deputy headmaster at the former Drummond Middle School in Manningham, Bradford. Edmondson attended Pocklington School, East Riding of Yorkshire from 1968 to 1975. Edmondson calculated that during his time at Pocklington, he received a total of 66 strokes of the cane as well as frequent slipperings. By the time he was in sixth form, with his parents working abroad, Edmondson began to enjoy himself, "which involved lots of drinking and smoking and petty acts of vandalism." After Pocklington, Edmondson went to the University of Manchester to study drama, where he met his future comedy partner Rik Mayall, and graduated with a 2:1 degree. Edmondson and Mayall soon became best friends and before long found work on the burgeoning alternative comedy scene.