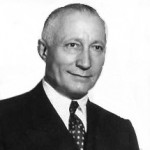 Zukor was born to a Jewish family in Ricse, Hungary, which was then a part of the Austro-Hungarian empire. In 1889, at the age of 16, he emigrated to the United States. Like most immigrants, he began modestly. When he first landed in New York, he stayed with his family and worked in an upholstery shop. In 1918, he moved to New City, Rockland County, New York, where he purchased three hundred acres of land from Lawrence Abraham, heir to the A&S Department Stores. Abraham had already built a sizable house, a nine-hole golf course and a swimming pool on this property. Two years later, Zukor bought an additional five hundred acres, built a night house, guest house, movie theater, locker room, greenhouses, garages, staff quarters and hired famed golf architect A.W. Tillinghast to build an eighteen hole championship golf course. Today, Zukor's estate is a private country club known as Paramount Country Club.