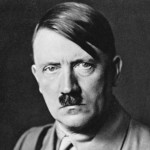 Adolf Hitler was an Austrian-born German politician and the leader of the Nazi Party. He was chancellor of Germany from 1933 to 1945 and dictator of Nazi Germany as Fuhrer und Reichskanzler from 1934 to 1945. He was at the centre of the founding of Nazism, World War II, and the Holocaust. A decorated veteran of World War I, Hitler joined the German Workers' Party in 1919, and became leader of the NSDAP in 1921. In 1923, he attempted a coup d'état, known as the Beer Hall Putsch, in Munich. The failed coup resulted in Hitler's imprisonment, during which time he wrote his memoir, Mein Kampf. Hitler's foreign and domestic policies had the goal of seizing Lebensraum for the Germanic people. He directed the rearmament of Germany and the invasion of Poland by the Wehrmacht in September 1939, resulting in the outbreak of World War II in Europe. In 1945 the Allied armies successfully invaded Germany. Hitler's supremacist and racially motivated policies resulted in the systematic murder of eleven million people, including an estimated six million Jews, and in the deaths of between 50 and 70 million people in World War II. In the final days of the war, during the Battle of Berlin in 1945, Hitler married his long-time mistress, Eva Braun. On 30 April 1945, less than two days later, the two committed suicide to avoid capture by the Red Army, and their corpses were burned.