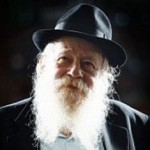 Adin Steinsaltz is a teacher, philosopher, social critic, and spiritual mentor, who has been hailed by Time magazine as a "once-in-a-millennium scholar". Steinsaltz studied mathematics, physics, and chemistry at the Hebrew University, in addition to rabbinical studies. He has devoted his life to making the Talmud accessible to all Jews. Originally published in modern Hebrew, with a running commentary to facilitate learning, his Steinsaltz edition of the Talmud has also been translated into English, French, Russian and Spanish. Beginning in 1989, Steinsaltz published several tractates in Hebrew and English of the Babylonian Talmud in an English-Hebrew edition. The first volume of a new English-Hebrew edition, the Koren Talmud Bavli, was released in May, 2012, with nine tractates in print by March 2014. New volumes are being released following the Daf Yomi cycle.