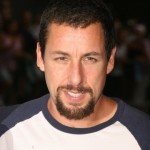 Adam Richard Sandler is an American actor, comedian, screenwriter, musician, and film producer. After becoming a Saturday Night Live cast member, Sandler went on to star in several Hollywood feature films that grossed over $100 million at the box office. He is best known for his comedic roles, such as in the films Billy Madison, Happy Gilmore, The Waterboy, Big Daddy, and Mr. Deeds, though he has ventured into more dramatic territory. In 1999, Sandler founded Happy Madison, a film and television production company that has produced numerous films and developed the 2007 television series Rules of Engagement. Sandler graduated from NYU's Tisch School of the Arts in 1988. Later in his career, he would draw on his earliest experiences for material for his comedy, music and movies. The song "Lunchlady Land" from his debut album They're All Gonna Laugh at You! is dedicated to Emalee, the lunchlady at Hayden Dining Hall at New York University.