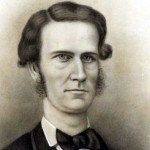 Adam Lindsay Gordon was an Australian poet, jockey and politician. Gordon was born at Fayal in the Azores, son of Captain Adam Durnford Gordon who had married his first cousin, Harriet Gordon, both of whom were descended from Adam of Gordon of the ballad. Captain Gordon, who had retired from the Bengal cavalry and taught Hindustani, was then staying at the Azores for the sake of his wife's health. After living on the island of Madeira, they went to England and lived at Cheltenham in 1840. Gordon had fallen in love with Jane Bridges, a girl of 17 who was able to tell the story 60 years afterwards to his biographers. Gordon did not declare his love until he came to say good-bye to her before leaving for Australia on 7 August 1853. "With characteristic recklessness he offered to sacrifice the passage he had taken to Australia, and all his father's plans for giving him a fresh start in life, if she would tell him not to go, or promise to be his wife, or even give him some hope." This she could not do, though she liked the shy handsome boy and remembered him with affection to the end of a long life. It was the one romance of Gordon's life. That Gordon realised his conduct had fallen much below what it might have been can be seen in his poems ... "To my Sister", written three days before he left England, and "Early Adieux", evidently written about the same time.