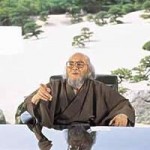 Adachi Zenko was born on February 8, 1899, in Iinashi Village in what is now 320 Furukawa-cho, Yasugi City, Shimane Prefecture, the site of the museum. Immediately after primary school, he went to work on his family's farm, but seeing that his parents' hard work was to no avail, he resolved to become a merchant. Throughout his life, this interest in business was expressed in many ways. He became a textile wholesaler in Osaka after World War II, and also dabbled in real estate. At the same time, he began collecting works by Japanese painters, something he had loved since his youth, and evertually became known as an art collector. Morning and evening Adachi would view his garden, and if anything appeared odd, however small, the gardener would be called in. Adachi Zenko passed away in 1990 at the age of 91, carrying to his ultimate twilight the fulfillment of his dream of presenting Adachi Museum of Art to the world.