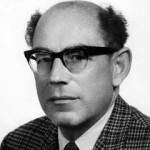 Abraham Robinson was a mathematician who is most widely known for development of non standard analysis, a mathematically rigorous system whereby infinitesimal and infinite numbers were incorporated into mathematics. He was born to a Jewish family with strong Zionist beliefs, in Waldenburg, Germany, which is now Wałbrzych, in Poland. In 1933, he emigrated to British Mandate of Palestine, where he earned a first degree from the Hebrew University. Robinson was in France when the Nazis invaded during World War II, and escaped by train and on foot, being alternately questioned by French soldiers suspicious of his German passport and asked by them to share his map, which was more detailed than theirs. While in London, he joined the Free French Air Force and contributed to the war effort by teaching himself aerodynamics and becoming an expert on the airfoils used in the wings of fighter planes. After the war, Robinson worked in London, Toronto, and Jerusalem, but ended up at University of California, Los Angeles in 1962.