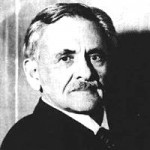 Abraham "Abe" Cahan was a Lithuanian-born American socialist newspaper editor, novelist, and politician. Abraham Cahan was born July 7, 1860, in Podberezhie in Lithuania at the time occupied by the Russian Empire, into an orthodox Litvak family. His grandfather was a rabbi in Vidz, Vitebsk, his father a teacher of Hebrew language and the Talmud. The family, which was devoutly religious, moved in 1866 to Vilna, where the young Cahan received the usual Jewish preparatory education for the rabbinate. He, however, was attracted by secular knowledge and clandestinely studied the Russian language, ultimately prevailing on his parents to allow him to enter the Teachers Institute of Wilna, from which he was graduated in 1881. He was appointed teacher in a Jewish government school in Velizh, Vitebsk, in the same year. On March 13, 1881, Tsar Alexander II was assassinated by terrorist members of the Socialist Revolutionary Party. Reprisals by the Russian state were quick and massive. A visit from the police prompted the young socialist schoolteacher to escape to the United States through emigration.