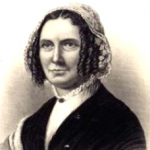 Abigail Fillmore was born March 13, 1798, in Stillwater, New York, U.S. By age 16, she was teaching at a school in New York, where Millard Fillmore was one of her students. They married on February 5, 1826. By the time Millard became vice president in 1849, Abigail's health had deteriorated. At the outdoor inaugural ceremonies for Franklin Pierce in 1853, she caught a cold and the next day came down with a fever. She developed pneumonia and died just 26 days after leaving the White House, on March 30, 1853, at the Willard Hotel in Washington, D.C., the shortest post Presidential life of any former first lady. She was buried at Forest Lawn Cemetery in Buffalo, New York. The memorial stone was placed by the Abigail Fillmore Chapter, National Society Daughters of the American Revolution, of Buffalo.